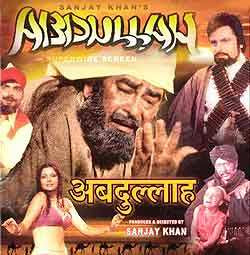 Abdullah (1980) dvdrip
Release Date: 1980 Starcast: Raj Kapoor, Sanjay Khan, Sanjeev Kumar, Zeenat Aman
Plot: Abdullah is a devout Muslim who lives in a small hut the middle of a desert in Persia, and looks after a well so that it provides water to thirsty travelers. One day a friend, Ameer, informs him that bandit Khaleel had raided a settlement nearby, killing everyone except for Yashoda, a pregnant woman.Shortly thereafter, Ameer himself iskilled, a mortally wounded Yashoda gives birth to a boy, nameshim Krishna, asks Abdullah to care for him, and passes away. Abdullah overcomeshis fears of bringing up a Hindu boy, and looks after Krishnaas his own. Then Khaleel's Magicianinforms him that he is going to die at the hands of Krishna, just as Bhagwan Shri Krishna was known to have slainKans, his maternal uncle, so also will Khaleel's life end at this Krishna's hands. Angered at this,Khaleel sets out to kill Krishna. He attacks Abdullah, abducts Krishna and readies him for a sacrifice, that will get rid of any threat against him. Will fate intervene to save Krishna, or willKhaleel succeed in sacrificing him?
Genre: Action, Drama, Family Runtime: 141:56
Abdullah_.avi
215.61 MB
[Download]
»
» Back To Home |