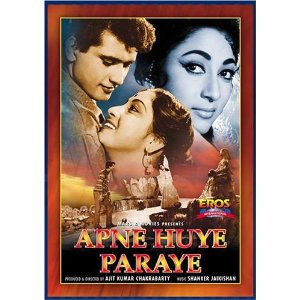 Apne Huye Paraye 1964 DVD
File Name: Apne Huye Paraye 1964 Release Date:
Starcast: Mala Sinha, Manoj Kumar, Shashikala, Agha
Plot: After the death of her friend, Shobha adopts her orphaned daughter Lata. She raises Lata as her own along with her own daughter Rekha and pampers Lata more than Rekha. Rekha grows up as a kind-hearted woman like her mother while Lata turns into a spoilt brat. Rekha (Mala Sinha) falls in love with her childhood friend Shankar (Manoj Kumar) who works as a doctor. But Lata (Shashikala) also is madly in love with Shankar and cannot stand the love of Shankar for Rekha. Jealousy plays its sinister trump card and ultimately Lata succeeds in getting married to Shankar. After the marriage, Lata moves out to live with Shankar, and Rekha's mother passes, leaving her a heavily mortgaged house and many debts. With Shankar still maintaining contact with his first love Rekha, Lata plans a scheme to destroy Rekha forever. What follows is a murder which will not only turn everyone's lives upside down but also throw open their individual lives to a public scandal. Genre: Family,Romance,Drama Runtime: 140:00
Apne_Huye_Paraye_1964DVD.avi
208.57 MB
[Download]
»
» Back To Home |