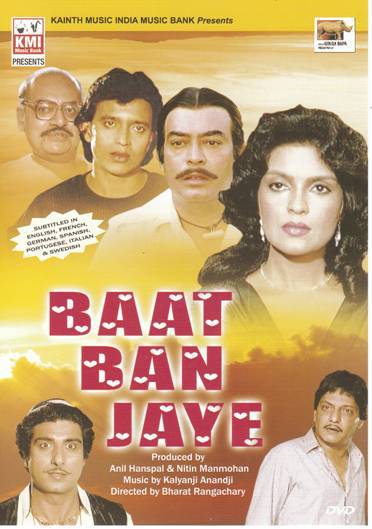 Baat Ban Jaye (1986) DvD Rip[Best Comedy]
Director: Bharat Rangachary Writers: Rahi Masoom Reza (dialogue), Sandip Mukherjee (screenplay)
File Name: Baat Ban Jaye (1986) Release Date: 1986 Starcast: Zeenat Aman, Amol Palekar and Utpal Dutt, Mithun Chakraborty, Raj Babbar, Sanjeev Kumar, Nisha Singh, Aruna Irani, Shakti Kapoor, Jalal Agha
Plot: Mr. Singh lives a wealthy lifestyle in a mansion named 'Ashiana' on 10th Road, Juhu, Bombay, with his only relative, a niece by the name of Nisha, who is unmarried and runs the family's business that faces strong opposition from Khanna Group of Industries. Singh would like to see her get married but she hates wealthy men. So her uncle finds a poor man, Ajay Srivastav, but subsequently finds out that Ajay is already married and also has 3 daughters; then he decides to get Nisha married to a TV repairman, Yeshwant Bhosle, who ends up being a multi-millionaire after his invention is marketed; then he wants her toget married to Viju Guide, a Hyderabad-based Tourist Guide, who finds buried treasure and also ends up a multi-millionaire; then he wants her to get married to a motor mechanic, Prakash, who, in turn, ends up being the only son of wealthy builder, Jayant Amar Nath, and ends up getting married to his sweetheart and neighbor... Genre: Comedy | Drama Runtime: 149.07 min
Baat_Ban_Jaye_1986_DvD_Rip_avi(1).avi
176.83 MB
[Download]
»
» Back To Home |