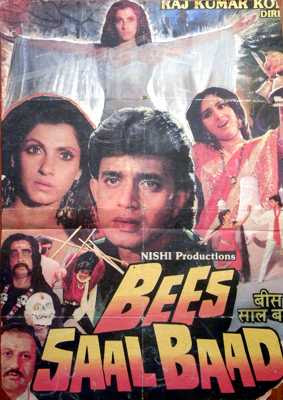 Bees saal baad (1988) dvdrip
Release Date: 1988
Starcast: Cast : Mithun Chakraborty, Dimple Kapadia, Meenakshi Sheshadri, Om Prakash, Shiva Rindani, Anupam Kher, Shakti Kapoor, Amjad Khan, Jagdeep
Plot: Kiran is the only child of wealthy widower, Thakur. While she resides in Britain, her dad lives in a palatial house in rural India. When the time comes for her to return home, her dad arrives at the airport to receive and is surprised to see her in the company of a young man, who she later introduces as her husband, Suraj. Thakur overcomes his shock at seeing Suraj, but welcomes him. On the way while driving, Suraj sees a woman in white blocking the road, but the driver is unable to stop the car in time. They alight from the car and note that there is no one on the road. That night, Suraj has a dream about a woman clad in white who is summoning him to her, claiming that she is Nisha, his wife from a previous birth. Using her magical powers she inserts a nail in one of Suraj's legs on a new moon night. All she has to do is wait for the next new moon, then insert another nail in Suraj's other foot, and then wait for Karva Chouth - that is the day that will put him completely under her control. Nisha also has an old score to settle with Thakur. A frantic Kiran cannot hear of this and she and her dad seek help from Tantrik Baba and Bhavani Baba. The question remains will the Tantrik and Bhavani be able to assist them or will they too fall prey to the vengeful spirit. Genre: Action, Horror Runtime: 145:29
bees_saal_baad_.avi
220.97 MB
[Download]
»
» Back To Home |