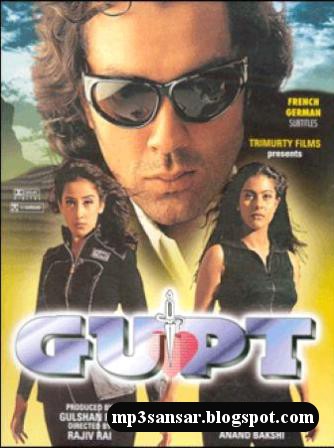 GUPT 1997 Dvd
(1997) Release Date: Starcast: Bobby Deol, Manisha Koirala, Kajol, Prem Chopra
Plot: Jaisingh lives in India with his son, Sahil, who dislikes his father. Things only get worse between father and son, when Jaisingh wants him to get married to Sheetal, a woman he has chosen to be his daughter- in-law. But Sahil wants to marry another girl by the name of Isha, and no amount of pressure can get him to change his mind. Finally, an argument ensues between the two, with Jaisingh getting killed. The Police are summoned, they arrest Sahil, try him in the Indian courts, convict him, but instead of giving him the death sentence, they put him in jail for life. A defiant Sahil, who still maintains his innocence, finds a way to escape, with the authorities hot on his tail, and leading this chase is a senior policeman by the name of Udham Singh, who has never been known to fail in his job of apprehending runaways and other criminals.
Genre: Drama, Musical, Thriller, Action, Crime Runtime: 173:00
Gupt_1997_.avi
186.34 MB
[Download]
»
» Back To Home |