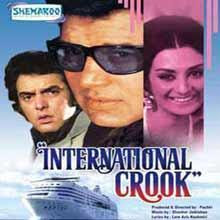 International Crook (1974) DVD Rip
Action | Crime - 22 July 1974 (India)
Director: Pachhi Writers: R.S. Choudhury (screenplay), AzizKashmiri (dialogue)
Starcast: Dharmendra, Saira Banu, Feroz Khan, Om Prakash, Hiralal, Rajan Haksar, Sunder, Jagdeep etc Plot: Superintendent of Police, Rajesh, is asked to take charge of a police station in Goa, and manage it. Rajesh is aware that his friend, Shekar, also lives there, and he is anxious to see him. Upon arrival in Goa, Rajesh and Shekar are delighted to seeeach other. Shekar is in love with Seema, and Seema too loves him. However, Seema's mom, Lajwanti, does not approveof Shekar, and would like Seema to marry Rajesh. When Shekar comes to know about this, he steps away, so that Rajesh and Seema can marry each other. When Rajesh finds out about Shekar's sacrifice, he decides to let Seema marry Rajesh, and shortly thereafter the marriage takes place. While Shekar and Seema go off on their honeymoon, Rajesh commences his investigation into smuggling activities off the coast of Goa, and his investigations lead him toa suspect by the name of Tiger. Little does Rajesh know, that Tiger is none other an alias for Shekar, who will do anything to protect himself from Rajesh and the police.... Genre: Action | Crime - 22 July 1974 (India) Runtime: 135.2 min
International_Crook_1974_DVD_Rip_avi.avi
169.58 MB
[Download]
»
» Back To Home |