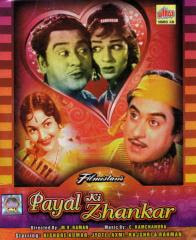 Payal Ki Jhankar (1968) Classic [DvDRip]
Relese Date : 1968 Genre : Action, Adventure, Comedy, Drama, Romance Runtime : 2h13m
Director : M.V. Raman Cast : Kishore Kumar,Jyoti Laxmi,Rajshri,Dhumal
Description : While taking a breakin the bush, Shyam, a painter and musician, meets with Pammi, a jungle beauty who has a herd of elephants at her command.Both dramatically fall in love, but mustpart company temporarily in order to let him seek his mother's blessings and get married. When Shyam returns home, his mother, Sita, is relieved to see him alive as she had been told by Diwan that he had been missing. Shortly thereafter, he will be introduced to Kala, the daughterof his mother's late friend, Kamla, who, his mother's hopes, will be her future daughter-in-law. On the occasion of his birthday, Kala and established dancer/singer, Shalini Kapoor, have a competition, a conniving Diwan arranges an accident which results in Kala's abduction, while Shyam passes out. When he doesregain his senses he is unable toremember anything/ anybody. Watch what impact thisincident has on his mother.
Payal_Ki_Jhankar_1968_DvDRip_.avi
193.98 MB
[Download]
»
» Back To Home |