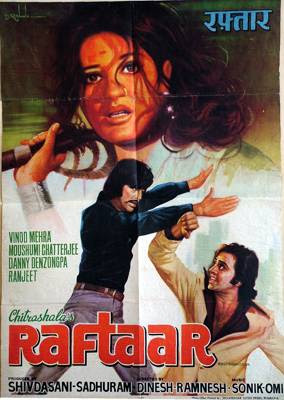 Raftaar (1975) DVD Rip
Director: Dinesh-Ramanesh File Name: Raftaar (1975) Release Date: 1975 Starcast: Moushumi Chatterjee, Vinod Mehra, Danny Denzongpa, Arpana Choudhary, Ranjeet, Madan Puri, Sunder etc
Plot: City-based Vikram is hired as a Manager by Kumar, a wealthy businessman, and asked to report for duty to a distant town in rural India. Vikram arrives there and carries out hisduties. He meets with pretty village belle Rani, and both fall in love with each other. When Kumar arrives for an inspection, he finds everything satisfactory,and asks Vikram to run an errand for him out of town. A few days later, Kumar comes to know that Vikram has been arrested by the police, found guilty by the courts, and sentenced to a year in jail. A year later when Vikram is released he finds that Rani is missing, and believed to be dead.A devastated Vikram attempts to try and put his life together when some hoodlums attack him - with a view to kill him. Vikram escapes, but is seriously wounded, and is looked after by a band of gypsies. After Vikram recovers, he re-locates to the city together with a woman named Radha and her child...
Genre: Drama | Thriller Runtime: 130.31 min
Raftaar__1975__DvDrip_.avi
154.15 MB
[Download]
»
» Back To Home |