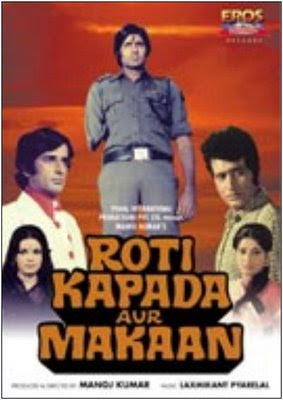 Roti Kapda aur Makaan 1974
File Name: Roti Kapada Aur Makaan (1974) Release Date:
Starcast: Manoj Kumar, Shashi Kapoor, Zeenat Aman
Plot: After the retirement of his dad, the onus is on Bharat to look after the Delhi-based family. He has two younger college-going brothers, Deepak and Vijay, and a sister of marriage age, Radha. Bharat is a graduate, but is unable to secure any employment, much to the frustration of his girlfriend, Sheetal. Vijay takes step to secure his own future, by turning to crime, which is strongly opposed by Bharat, and as a result Vijay leaves the house. Mohan is Sheetal's boss, and finds her very attractive. When he proposes marriage, she accepts, and soon both are married. This leaves Bharat devastated, unable to deal with life, and unable to afford the basic needs of Roti (food), Kapada (Clothing), and Makaan (Shelter), he must now decide to carry on honestly, or otherwise. Genre: Drama, Musical Runtime:
Roti_kapda_aur_makan.avi
243.19 MB
[Download]
»
» Back To Home |