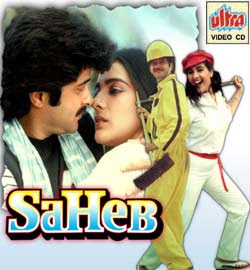 Saaheb 1985 DVD
Release Date: 31 January 1985 (India) Genres: Action | Drama | Romance| Family
Director: Anil Ganguly Writers: Sachin Bhowmick (screenplay), Madan Joshi (dialogue) Stars: Rakhee Gulzar, Anil Kapoorand Amrita Singh
Storyline Mr. Sharma (Utpal Dutt) lives with his four sons (Biswajeet, Vijay Arora, Dilip Dhawan) and a daughter, Geeta or Butlie. Only the youngest son, Sunil (Anil Kapoor) and Geeta are unmarried. Mr. Sharma arranges his daughter's marriage with a man who will be re-locating to London, U.K. The family requires Rs.50,000/- for the expenses, and will even go to the extent of selling their house. Sunil or Saaheb as he is referred to, is the black sheep of the family - unemployed & uneducated - onlyinterested in playing football. None of the elder brothers haveany means of coming up with money for the expenses, and two of them even scheme with their respective wives to take over the house. Mr. Sharma attempts to raise the money, in vain. Sunil then makes the ultimate sacrifice for the marriage of his sister, and bringsthe money to his dad. His dad believes that Sunil has stolen the money..
Saaheb_1985_DVD.avi
172.37 MB
[Download]
»
» Back To Home |