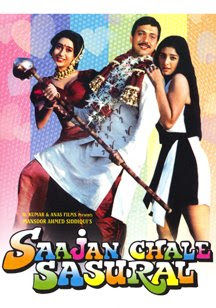 Saajan chale sasural (1996) DvdRip
Release Date: 1996
Starcast: Govinda, Karisma Kapoor, Tabu, Shakti Kapoor
Plot: Naive villager Shyamsunder, who sings, comes to Bombay to try his luck with Bollywood and wealth. He ends up on the streets, playing for small alms. He meets with another musician, Muthu Swami, and both attempt to meet the owner of Tips Cassettes, Mr. Khurana, for an audition, in vain though. Then one day, Shyamsunder meets beautiful Divya, the only daughter of Mr. Khurana, and both fall in love with each other. Divya would like to marry Shyamsunder, and also further his career. What she does not know is that Shyamsunder loves another woman from his village by the name of Pooja, who he has promised to marry. Pooja arrives in the city, and with Divya already present there, Shyamsunder and Muthu Swami invent a look-alike of Shyamsunder, with hilarious results. Genre: Comedy, drama Runtime: 134:06
Saajan_chale_sasural_.avi
203.63 MB
[Download]
»
» Back To Home |