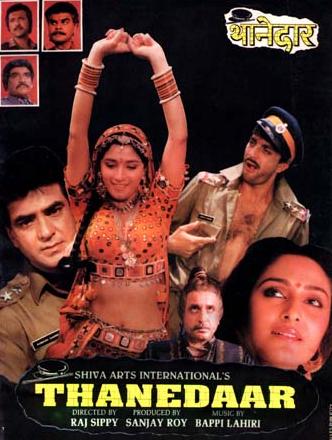 Thanedaar 1990 DvDRip
Relese Date : 10 Dec 1990 Genre : Action, Crime, Drama Runtime : 2h31m
Director : Raj N. Sippy Cast : Jeetendra,Sanjay Dutt,Jayapradha,Madhuri Dixit
Description : Honest and diligent Police Inspector Jagdish Chandra (DalipTahil), while carrying out hisinvestigation against Ajghar Singh (Kiran Kumar) is killed by an assailant (Mahavir Shah) hired through the Peter (Tej Sapru) and Lawrence (Goga Kapoor) by Ajghar Singh. Leavingbehind two young boys, one of whom, Brijesh kills the assailant, and is taken-in by Peter and Lawrence to further their ends. The other son, Avinash is adopted by the policecommissioner, and grows up(Jeetendra) to be a police inspector like his dad. Brijesh (Sanjay Dutt) meanwhile has justbeen released from prison, and after attempting to rob a jewellery store, he flees with hisgirlfriend, Chanda (Madhuri Dixit)to the same village where his dad lived. On the way there, he mistakenly throws Avinash out of the train after a fight. Once in the village, he assumes the identity of Avinash and starts lording over the villagers, and taking bribes from Ajghar Singh. Things start getting complicated when Avinash's wife, Sudha (Jayapradha) arrives there to look for her husband; and when Chanda is molested by Ajghar and his men,forcing Brijesh to take a stand, aided with a mysterious maskedhorse-rider, or alternatively leave the villageand go back to the city. Ajghar will go to any lengths to get Brijesh out of the village, even to the extend of re-hiring Peterand Lawrence, to carry out this task.
Thanedaar_1990_DvDRip.avi
220.39 MB
[Download]
»
» Back To Home |