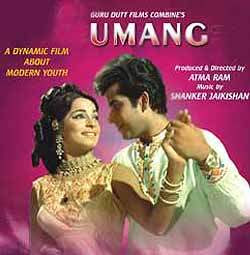 Umang 1970 DVD
File Name: Umang 1970 DVD Release Date:
Starcast: Satish Kumar, Archana,Rehman, Paintal
Plot: A group youngsters are planning the Silver Jubilee celebration of their beloved Apollo Dance Club. It resides on the land owned by Rai Saheb (Rehman). Although it an illegal property the club has the support of Aunty (Durga Khote) and Captain (David) who are the residents of the colony. Asha (Archana) is the only daughter of Rai saheb and goes to the celebration without her father's knowledge. Meena (Meena.T) is the daughter of Captain and her brother Kailash (Akashdeep) is soon going to get engaged to Asha. Kailash is not serious about Asha and he wants the marriage only because her father's wealth. During the celebration Asha meets Satish (Satish)who is the secretary of the club. Rai Saheb sends Munim (Randhir) and his men to evict the illegal occupants. But Asha saves the situation and leaves. Satish and Asha grow close to each other. The club members plan to buy the land from Rai Saheb in instalments. But Rai Saheb turns down the offer. The club members go on a huge strike and when that fails they threaten him wit self immolation. With the situation gong out of control Rai Saheb gives into their demands. They begin collecting money for the land by doing public shows. Kailash gets to know about the growing fondness between Asha and Satish and decide to ditch the other group members during the show. The show turns out to be a failure. Satish and co seek revenge and manage to break Asha's engagement with Kailash. Rai Saheb becomes furious due to the whole incident and obtains decreee from the Court to evict the trespassers Will Satish be able to be with the love of his life? Will the club members be able to get he land from Rai Saheb? Watch this tale of youth to find out. Genre: Drama, Family Runtime: 138:00
Umang_1970_DVD.avi
206.76 MB
[Download]
»
» Back To Home |