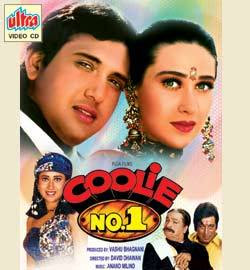 Coolie No1 (1995)
Release Date : 30 June 1995 (India) Genre : Comedy
Starcast : Govinda ... Raju Karisma Kapoor Karisma Kapoor ... Malti
Description : Pandit Shaadiram Gharjore is a village match-maker. When he takes some guy's family to see Malti, Hoshyaarchand (her father)insult the family and throwthem out, saying he wants a son-in-law at least 40 times wealthier than he. Panditji is so humiliated that he vows to do something about Hoshyaarchand's ego. This is where the story begins. Panditji goes to his friend, Raju (Coolie No. 1) (who, bythe way, has fallen in love with this rich girl since he saw her picture before panditji took the random guy's family to see her), and convinces him to pretend to be the son of the richest man in Asia. After alot of bootlicking on the part of Hoshyaarchand, Malti and Raju get married.The rest of the film revolves around upholding this bit of deception, and gets quite interesting....
Coolie-No_1_1995_-1_.avi
101.06 MB
[Download]
Coolie-No_1_1995_-2.avi
100.54 MB
[Download]
»
» Back To Home |