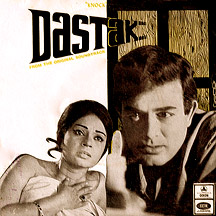 Dastak (1970) DVD Rip
140 min - Drama | Mystery | Fantasy | Musical - 31 December 1970 (India)
Tells the story of newly weds Hamid and Salma. They move intoa rental flat next door to the local red light district. The flat had been the former home of a well known mujra and qawali singer, Shamshad. Men still come to the door in the hope of seeing Shamshad and do not seem too put out by seeing Salma despite her protestations.The couple struggle to live withinthe bounds of their own moral code while the earnings of prostitution seem to be flauntedaround them. Hamid gets more and more angry and seemingly unable to reconcile his morality with the immorality of the world and at one point beats his wife and then rapes her making her into a 'whore' of his fantasy. Thestory here bears resemblance tothe later 'Ek Chadar Maili Si' by the same director and seems to explore the complex world of women and sexuality as viewed by Indian men: mother, goddess, whore. This film also explores theethos of prostitution in its reality and as a metaphor for the outside world.
Director: Rajinder Singh Bedi Writer: Rajinder Singh Bedi Stars: Sanjeev Kumar, Rehana Sultan, Shakeela Bano Bhopali, Manmohan Krishna,Anwar Hussainetc
Dastak_1970_Dvd_Rip.avi
166.03 MB
[Download]
»
» Back To Home |