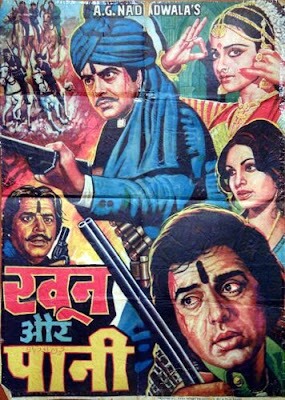 Khoon Aour Paani 1981 DvdRIP
Starcast: Feroz Khan, Jeetendra,Rekha Ben Kinney Jr.
Plot: Singh is a farmer and lives a poor lifestyle along with his wife, and two sons, Ram and Laksman. The region is drought stricken, while in contrast there is plenty of water being pumped to bath the dogs of Thakur Vikram Singh. When Ram decides to divert some water for their parched fields, Vikram kills his father. An enraged Ram goes to avenge his death, manages to kill Vikram's brother, but is seriously injured, loses his memory and ends up with a gang of bandits and is renamed Thanedar Singh as he was dressed in the clothes of a police inspector. Lakshman gets separated from his mother and is found near a river bank by Police Commissioner Bhalla, who adopts him. Years later the two brothers are fated to meet again albeit as strangers and mortal enemies as Lakshman is a incognito CBI Officer, while Ram is dreaded bandit Thanedar Singh who is unable to recall his childhood, and loses control whenever he hears the sound of a water-pump.
Genre: Action,family,drama
Khoon_Aur_Paani_.avi
255.18 MB
[Download]
»
» Back To Home |