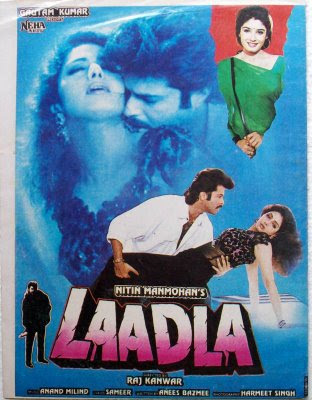 **Laadla (1994) Dvd Rip**
Anil Kapoor, Sridevi, Raveena Tandon, Farida Jalal Details Release Date 17 Mar 1994
Genre Drama, Family Run time 2 hrs 49 mins
Plot Summary Laadla (The Beloved Son) is the story of Raju (Anil Kapoor) who lives with his disabled mom (Farida Jalal). One day Raju on his way to a job interview saves the life of a rich textile mill owner (Anupam Kher) who offers him a job in his factory which is run by his ambitious daughter Sheetal (SriDevi). Sheetal's competitive attitude and open insults result in her making several enemies in her industry. Raju works as a mechanic in the mill and confronts Sheetal several times to get the workers proper treatment. Raju's fairness for workers result in him being elected as the union leader. Raju meets Kajol (Raveena Tandon), who also works in the textile mill, and they fall in love. Raju saves Sheetal's life during an attempt by a competing textile mill owner (Prem Chopra) to eliminate her. Sheetal wants to win over Raju and makes an offer to marry him. When Raju turns her down she forces his mom to agree to the marriage. Raju accepts his mom's wishes and decides to sacrifice his love for Kajol. Sheetal expects Raju to move in with her after their marriage and live in luxury, but Raju refuses and continues to work in the mill. Tension arises between Raju and Sheetal, when she fires Kajol out of jealousy. Also labor issues cause the workers to go on strike. The competing mill owner plans to take advantage of the situation and hires hoods to set the mill on fire. Raju in his attempt to stop the fire is mistakenly arrested. Raju's mom goes to Sheetal's house to clear matters but is insulted and told to leave. The bad guys kidnap Sheetal. Will Raju be able to save Sheetal Will Sheetal find out the truth.
LAADLA_.avi
269.72 MB
[Download]
»
» Back To Home |